The Pros and Cons of Agile and Waterfall

Agile and Waterfall (1) are potentially two very different ways of delivering projects.  Firstly we will describe them both and then compare their respective advantages and disadvantages. 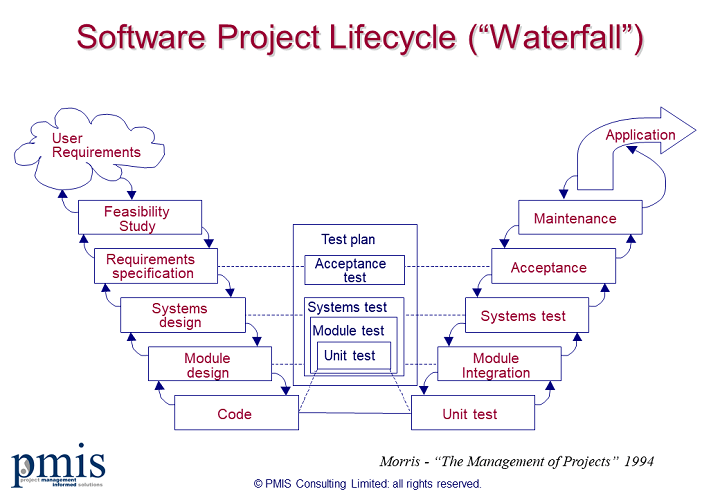 Waterfall (1) projects go through a number of sequential or overlapping phases.  This defines the life-cycle of the development effort of the project.  The principal difference with Agile is that in Waterfall, requirements are defined near the start of the project and then may be subject to change control through all following phases.   Waterfall was adopted from Engineering, where on large-scale projects physical design is often a critical activity itself and the impact or cost of changing the design can be very significant.

Some people state incorrectly that in Waterfall if an error is found in the later stages of a project, it will need to be scrapped and started again.  While this is not impossible, it would have to be a very significant issue to cause this level of impact.  In truth, this will only occur if there is very poor control of a project. It is also not true that Waterfall projects never involve iteration or feedback – they certainly can but some project teams choose not to.

Agile itself is not a PM framework and it is not a “methodology”. It is a set of principles and values relating to product development, specifically producing software (2).  There are, however, methods based on Agile principles, and these are Product Development methods, not project management frameworks. The biggest difference between Agile and Waterfall is that typically in Agile the deliverable is produced and accepted incrementally, around short iterations or equivalent (usually 2-4 weeks). Additionally, using Agile, requirements are normally fully defined around each iteration, rather than at the start of the project in a single requirements phase. Prior to this, higher level items such as features will usually be identified. These will then be broken down into discrete items to be fully defined and developed within iterations. One key aim of Agile is to try to retain as much flexibility as possible throughout the development cycle. Certain types of projects will never suit a true Agile approach. For example, if the main project deliverable cannot be defined, produced (and accepted) sequentially and incrementally, it is unlikely that the core of Agile can be used. However, any project can benefit from some of the practices commonly found in Agile, most notably around communication.

Clearly, the two approaches are very different and will have completely different pros and cons.

So let’s look first at Agile:

Agile and Waterfall are very different and it will not always be possible to choose between them both.  Waterfall could be applied to virtually any type of (IT) project. Agile requires specific conditions to be in place to be possible but is not applicable to certain projects – especially those of a large physical nature.  Most of the conditions required for Agile to be possible relate to the working environment and practices that can and cannot be employed by the whole project team, not just those responsible for the development. There also needs to be flexibility around requirements together with the capacity to deliver and accept product incrementally.

1 – The term “waterfall” is used liberally and many would say incorrectly to describe all non-iterative (i.e. predictive) forms of project management frameworks.  Waterfall, as defined in 1976, is a (rarely used) software development framework. However, the central principles of Waterfall (i.e. sequential/overlapping phases) were borrowed from Engineering and therefore there is a clear parallel between IT development methods that follow a Waterfall type of approach and many physical and engineering projects, which still do to this day and will continue to do for a long time to come, due to the physical nature of those projects, meaning some things have to be done in sequence.

2 – We say “mainly software” as there are few types of projects outside of the software domain where the deliverable can truly be produced and accepted sequentially and incrementally or where requirements can evolve within the development phase.  A phased delivery of any project does not mean it is Agile (despite the claims by some that it is).  It is simply a phased delivery.

Email us today to find out more on how we can help you.