What makes a great project manager?

What makes them successful?

There are many blog posts and discussions on ‘what makes a great project manager’. It’s a question you could write a book on. Here we are summarising a few important ideas, observations and experiences.

Firstly, let’s deal with one point that gets us absolutely nowhere! Places like Linkedin abound with questions like “what is the single most important quality of a great project manager”.  There is no one such thing.  It’s a pointless discussion.  Sure, there are things that are high up the list, but none on their own will get you there.

Being successful as a PM even at the basic level is very challenging. It is therefore unsurprising that few people in business will ever make a ‘great’ project manager. No matter how you chose to measure great (1).

However, it is hugely valuable to understand the broad qualities, skills and competencies, that project managers require to be successful in any industry.  It is also not defined well enough yet, as a question. Nor is it applied by far too many businesses well enough, within the selection and development of potential project managers.

In short, far too many project managers are ‘chosen’ by far too informal and unstructured methods.

So, let’s look at some of the most important areas. In short, they break down into the following:

If they get to carry out the role for long enough and their personal performance improves, they will develop an understanding of the degree of leadership that is required.

Two very simple examples of this would be their ability to lead the resolution of serious issues on a project, and the degree to which they are personally willing to take responsibility for the breadth of their role and the project as a whole.

Again, all great project managers have an innate and fundamental understanding of planning and management concepts, skills and processes. Coupled usually with high levels of organisational skills, (2)  which is a much under-rated and hugely important aspect of delivering projects successfully.

They also often have high levels of emotional intelligence, which helps greatly with inter-personal relationships especially when there are challenging times.

It may surprise some people that we would include technical skills. We do so for two reasons:

Great project managers have an unusual combination of hard and soft skills.  Most people excel at one or the other, rarely both.

That is one of the primary reasons why most of us in business may be great at our individual role, but may not make a ‘high performing’ project manager.

And the cat’s eyes – what’s that all about? 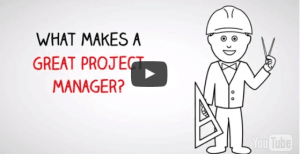