We have been formally involved in implementing Earned Value Management  (EVM) with customers since 1993, and hopefully during that time have learned one or two things about EVM.

One of those is that it does throw up lots of challenges and questions to businesses when they first try and do it – you could write a whole book on the subject.  One of the things we always say at the start is that when you first try and produce EVM (in any sizeable) business, it is more likely to show up the gaps and issues in the project management function (or process), rather than deliver up accurate and useful information.

This does not mean however there is anything wrong with EVM – quite the opposite, EVM is a very sound concept.  What it means in these circumstances is that there is a lack of robustness and discipline in the way in which plans are constructed and crucial PM data is collected and processed against those plans. For example, reporting to customers can be a huge influence on this question. 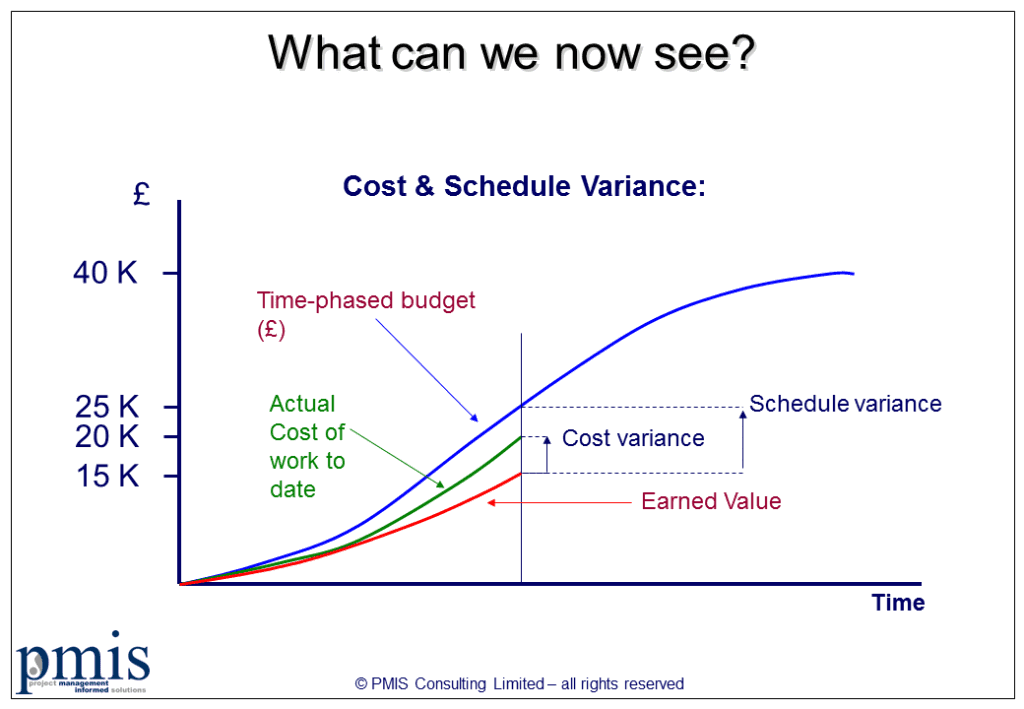 Let us show you a real (and common) example:

Let us share one specific example we regularly see (especially in certain industries) in the UK. In the Construction Industry in the UK all major contractors employ Quantity Surveyors (QSs).  In the UK, QSs are heavily involved in tracking costs on commercial contracts (many of which attempt to produce EVM data).  The role of the QS is key to this issue so please bear with me.  QSs do a number of things in many UK Construction firms, including keeping a running tally (financially) of the company’s financial exposure by contract.  Another way of saying this is if the contract was cancelled suddenly, what total sum of money would the contractor be exposed to, or have to payout?  For major contracting businesses, this is an important consideration.  QSs also get involved with the measurement of work performed, often in physical terms.  Ideal you might assume if you want to introduce EVM?  Perhaps. Perhaps not.

So where does it go wrong?

Given the role a QS has in such a business, they typically become heavily involved in an EVM process, most notably around the areas of cost and progress (i.e. that which should be driving the actual calculation of EV), and there is often one example that completely breaks the basic rules of EVM.

Imagine we are procuring a large piece of kit on our project, that will take 12 months to arrive following placement of the formal order, and will cost £10M.  At the point of placing the order, within your calculation of EV for that period, you should include the tasks associated with placing the order (e.g. preparation of specification etc.), but we should never claim the total value of the item being procured at the point of placing the order within our calculation of EV.  However, that’s exactly what every QS in the UK I have ever met (so far) will do (¹), even when the EV concept is thoroughly explained to them (and many of them work for the largest Contracting companies in the UK).

This is totally wrong. EV must be driven by physical progress alone. At that point in time, the only progress is order placement. Not order delivery. Doing this ruins the integrity of Earned Value data.  It will falsely overinflate the calculation of EV and will make SPI and CPI wrong as well (given that all calculations include the value of EV).

What it means is the EV data is wrong and highly misleading.

Why is this important?

Quite simply because if done routinely, reported ‘performance’ will be much better than it actually is in reality, masking real issues until often it is far too late to recover.

and a little bit of evidence?

In 2012 in the UK, we had a fairly big project, called London 2012.  This is exactly what they did in large parts of this project too, and if you wish to get a view on actual £ performance against the budget for London 2012, please click here:

1 – In the UK, (all the) QSs (I have met) will instinctively try and calculate EV using some form of actual cost, for the reasons mentioned above.  Involving any form of (actual or committed) cost in the calculation of EV is totally wrong.