Is the word ‘control’ a good or a bad thing in projects?

What is ‘project control’?

The word ‘control’ in the world of projects generates a lot of controversy, but we would say that’s due to a lack of appreciation of what it really means. In this post, we will explain why.

So let’s look at one extreme view: can it ever even exist?

Some say that you can’t use the word control on projects as projects carry a great deal of uncertainty and it gives the impression of the opposite.  There are people who share this opinion quite loudly (especially online).

Let’s look at what it should mean and where it came from:

The word control is not a bad word. It stems from the work of early pioneers of disciplined management (¹) (as far back ago as the 19th century), whose work forms the basis of any current-day development or project management method (including continual improvement activities), which is (often known as PDCA):

It is the ‘adjust’ in the above that was originally ‘control’.  What it implies is that (management) decisions are taken on the basis of feedback, measurement and analysis.  A principle that is fundamental to the effective management of projects. 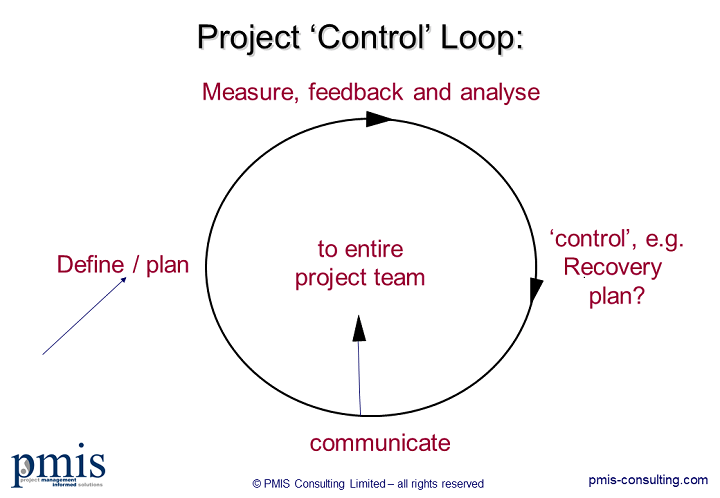 In any application of PDCA, it does not infer at all that anyone can predict an outcome, but it does describe the application of a basic discipline of control to any activity where the outcome may be variable. There are no better examples of this in human (business) activity than genuine projects.  That’s what project control really means. And it is very much from the same thing that the doubters say – projects do carry great uncertainty so plans will have to be adjusted and updated. Otherwise, we are simply into accounting and the project will have its own uncontrolled momentum – as far too many do.

So why do some people dislike the word ‘control’ so much?

We have dealt with hundreds of firms and projects since the business started, in all walks of life and we are going to be just plain honest. If this offends some people so be it.

What is very clear is that some people:

Which pretty much sums up the whole core of PDCA.  Should we really be surprised by their dislike of the word? Not really.

Personally, I would extend it a lot more, to include for example: